How I Came to Love Buffy the Vampire Slayer.

Yesterday was the 20th anniversary of the airing of “Welcome to the Hellmouth,” the premier episode of Buffy the Vampire Slayer. Upon seeing that this milestone was approaching, my first thought was “Damn, I’m getting old.” When Buffy started, I was just 26, and in my second year of teaching. It would be another year before I met my wife. I have gone through three presidents, five Star Wars movies, thousands of students, and eight cats.

I am a fan of many things. It makes it impossible to be a rabid fan of any single franchise, at least not for long. Back in 1997, though, I would have likely considered myself to be a science fiction fan more than a horror fan. It makes sense – horror films were in a lull, Star Wars had dominated my childhood and was beginning to emerge from pop-culture purgatory (it was so out of vogue one of my first days teaching a student asked me if I had ever heard of a film called “Star Wars”), The X-Files and Babylon 5 were in full swing. But as a fan, it was Star Trek that was mostly catching my attention. It was coming off the successful Next Generation run, with Deep Space Nine in the midst of its fifth season and well on its way to becoming my favorite series in the franchise. I was having trouble maintaining interest in Voyager, but was sticking with it in hopes it would improve (it didn’t, at least not enough, and I stopped watching soon after).

And then along came Buffy.

My first real exposure to Buffy the Vampire Slayer came from (I believe) Starlog magazine, in the summer of 1992, shortly before the film’s release. I knew the film was coming out, but I had only marginal interest because of Donald Southerland’s involvement. Then I read the Starlog interview with then-unknown writer Joss Whedon. He explained his vision for Buffy, now familiar to fans. He wanted to subvert the trope of the helpless blonde girl who falls victim to the monster in the alley. Just once, he wanted to see her emerge victorious. It was an interesting idea, and in that interview, he not only sold me on the film, but convinced me that he was a fan of the genre, and a knowledgeable one. So I gave the film a shot, but aside from the performance of Paul “Pee Wee” Rubens, I came out of the theater disappointed. Either Whedon lacked the chops to back up his words or, more likely, the director and studio deviated from his ideas.

Four and half years later, when I read that they were turning Buffy into a series (for the WB no less!), I was tempted to scoff along with everyone else. But I also remembered that interview, and decided to give it a shot.

I was enamored with the series from the start, and for several weeks had trouble reconciling the fact that I was enjoying Buffy so much, and Star Trek Voyager so little (surely a big factor in getting me to give up that ghost).  I recorded every episode, and re-watched them regularly, and managed to turn many friends, and eventually my wife, into fellow watchers.  Throughout its run, I would encounter people who laughed at the series, but few had ever watched an episode.

To be fair, the first season is rough, especially in hindsight. The first episode is good, but not brilliant, and there are plenty of clunkers mixed into those first thirteen episodes (“I Robot, You Jane” among the series’ very worst). But it was still very fresh compared to most of what was on the air. Whedon’s ability to subvert tropes kept us guessing, and his weird knack for language made it sound like nothing else (though it did turn some people off).

So I wanted to write something in its honor. Many are writing about its influence, and others about its best episodes (all the usual suspects: Hush, Becoming, Once More with Feeling, The Body, etc). Instead I found myself thinking back to those early episodes, and pondering what made me a fan. Not just the characters (always have been, always will be, a fan of nerdy Willow and Xander), and the dialogue and other general things that carried through the whole series, but what were specific moments from that first season. So I picked ten moments from that first season, listed in chronological order (needless to say, SPOILERS follow, but c’mon it’s been two decades!): 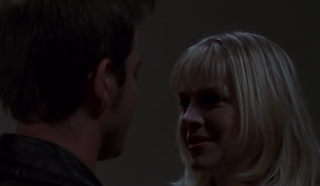 The very first scene of the first episode. At this point, I didn’t know my Sarah Michelle Geller from my Charisma Carpenter. Seeing a timid, blonde school girl (Dexter’s Julie Benz) sneaking into Sunnydale High with her cool, leather jacketed boyfriend, I figured this was the Buffy introduction. He was the vamp, and she would kill him. Of course, it wasn’t to be. Imagine my surprise when the cocky, rooftop loving stud turned into the series’ first victim. 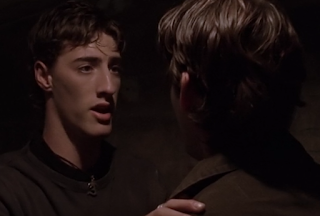 Originally aired with “Welcome to the Harvest” as a two-hour series premier, we were still at the point of learning who was who, and surely had not memorized the opening credits. It seemed to us that Jesse (Eric Balfour) would be part of the nascent Scooby Gang. Naturally, Whedon, a fellow comic nerd, had studied up on Super-Hero 101, and had Buffy’s new friend kidnapped and used as bait in a bound-to-be unsuccessful effort to trap the Slayer. Surely she would save the day, and they would have many seasons of fun adventures together. Except it didn’t work out that way.

Last one from the first episode, I promise. One of the vampire tropes that always bothered me was the convenient intervention of sunlight at the last second. So it was that the premier ends with Buffy facing off against super-vampire Luke in the Bronze, Sunnydale’s teen-friendly hangout. She raises a mic stand to impale Luke, who laughs because, hello, not a wooden stake. “Here’s something you forgot about, too – sunrise!” Buffy taunts as she hurls the mic stand through a window, bathing Luke in the yellow glow of the sun. I rolled my eyes, I’d seen it a hundred times before and was disappointed to see it yet again. And then “,,, is in about nine hours, moron,” as Buffy stabs the distracted vampire with a stake, averting the apocalypse. I laughed. They got me. 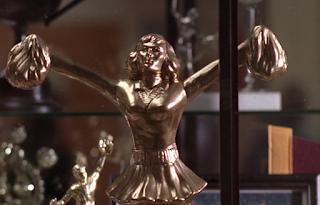 The first episode after the premier, “The Witch” had the heavy burden of showing viewers that the show was about more than vampires. A metaphor for the pressures parents can place on their kids, it veers wildly from silly to tragic and back again, and remains one of my favorite episodes, but there is something about the final shot that just creeps me out (and, given the callback in later seasons, likely resonated with others as well).
5.       The Breakup (“Never Kill a Boy on the First Date”) 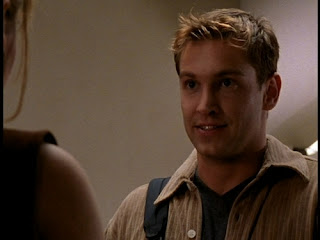 A big theme in the first season was Buffy trying her best to shirk her duty to live a normal life. In this mostly forgettable episode, Buffy is trying to balance averting the apocalypse with dating a cute boy (Christopher Wiehl) and nearly gets him killed. Where we expect the boy to dump Buffy for being too weird and dangerous, it is instead Buffy who cuts him loose when he begs her to take him on more adventures. Superman could take a lesson from Miss Summers.
6.       Flutie’s Farewell Dinner (“The Pack”) 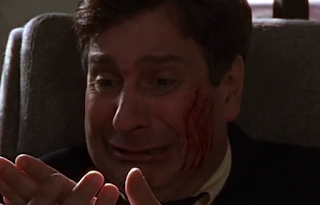 When Buffy’s schoolmates are possessed by hyenas in a forced bullying metaphor, they are called into Principle Flutie’s (Ken Lerner) office and eat him. It happens off screen, but it happens. In the era of The Walking Dead, American Horror Story, and Hannibal this may seem tame, but at the time I was shocked that they went there. Please remember, I was teaching high school students at the time, so it had some resonance.
7.       Do You Remember? (“The Pack”) 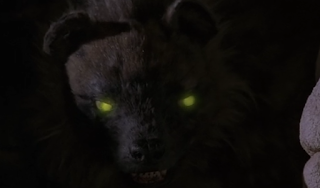 Another annoying trope in genre tales is when a possessed person conveniently forgets everything they did after being freed. And poor Xander (Nicholas Brendon) admits as much after being released from his inner hyena… but it is also clear he lied. Which means the rest of the pack will forever live with the memory of killing and eating poor Principle Flutie. It’s a tiny thing, but it tickled me.
8.       Poor Cordelia? (“Out of Mind, Out of Sight”) 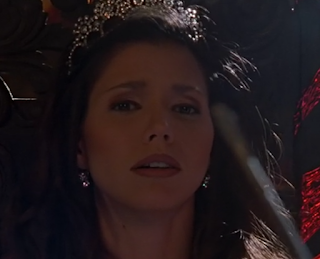 Putting a quantum mechanical spin on the Invisible Man, an ignored girl disappears and seeks revenge on the popular kids. Up to this point, head cheerleader Cordelia Chase (Charisma Carpenter) has been Buffy’s greatest mortal nemesis, and constant reminder of the shallow, stuck up bitch she used to be. When Invisible Marcie (Clea DuVall) ensnares Cordelia and threatens to mutilate her lovely face… well, this is a show that vamped Jesse, killed students at a regular clip, and just ate its principal – they might just dispense with the beauty queen! For me it remains one of the series most tense moments, but more importantly, it was the first step to humanizing Cordelia and eventually turning her into one of the show’s strongest characters.
9.       Open Your Textbooks (“Out of Mind, Out of Sight”) 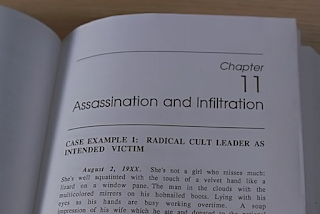 Little things go a long way, and for most fans, the tag at the end of this episode is what they remember best – the US government comes in at the last minute and takes Marcie away to be locked up forever… or to put her in a class of other invisible children, who will be taught the fine art of espionage. This is our first hint that the sinister forces in Buffy’s world are not escaping the notice of the mortals in charge.
10.   I Wonder Who She Is. (“Prophecy Girl”)

Obvious much of the series is a metaphor for the pains of adolescence. Here, after fighting vampires, demons and other assorted monsters for a dozen episodes, Buffy at last comes face to face with her mortality. When prophecy reveals that Buffy will be the latest slayer to die in the line of duty, to be forgotten and replaced by the next girl in line, she does what I imagine most girls would – she quits. For a character who was often vain and shallow, her raging at the unfairness of it all and final, tearful plea is heartbreaking. It is also a highlight for Sarah Michelle Geller, who could have chewed the scenery beginning to end, but brings the feels home by reigning it in at the end. A true turning point in the series.
Posted by Mister D at 4:11 AM