Sorry for the delay. Things got busy.

Convention Sunday is almost always anticlimatic.
Friday you're happy to arrive, anxious to see who's showing up, finding old friends, scouting vendors, maybe trying to get an early autograph or two. Then there's the inevitable party at the bar.

Saturday everyone is there. All the guests have arrived, the halls are packed, panels are full, everything is in full swing. You have your costume contests, parties, parades and whatever else the con goers dreamt up. It is too easy to get swept up in the excitement and forget about simple things like eating and drinking.

The Sunday comes. For some there is the inevitable hangover after two days of frenzied activity and late night drinking. You've packed up the room, so one foot is already out the door. The crowds dry up, and some of the celebrities and vendors have already decided to punch out early. You can get some good deals, and like Friday, miss the long autograph lines, but the mood is more mellow. The fun is coming to an end.

So it was at day three of Scare-A-Con.

But I was determined to go out big. Or as big as I could. Phil had already headed home to his wife, children and, of course, little dog, leaving me to man the Dark Discussions table alone. I took the opportunity to put on my game face and hand out the last of our discs and put DDP pins in as many hands as I could. Had some great conversations with fans and fellow podcasters and just enjoyed myself.

There were two events of some significance to me.

First, I got to be on my first ever panel as a guest. When I first started hosting Dark Discussions, I went to Horror Realm in Pittsburg, where there was a similar panel on how to have a successful podcast. It turned out I was the only fan in the audience, asking questions of the four podcasters (most of whom were out of the game a year later).

Nearly five years later here I was, the tables turned. Here I am with author Robert E. Wronski of the Television Crossover Universe Podcast, Jesse of the Deadites podcast, and my weekend neighbor Kevin Crook of the Dorkening. 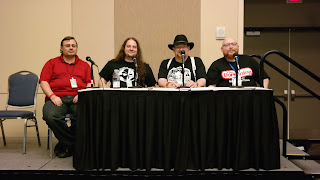 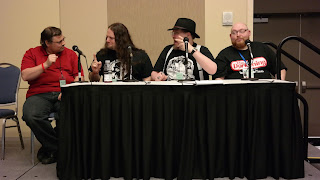 And here was our audience: 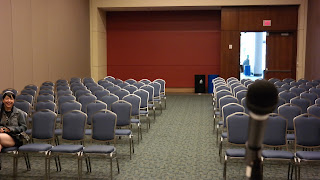 It all comes full circle. Good thing Jesse has a girlfriend.

Funnily enough, we still did the panel, even without an interested audience. We had fun at least. Sorry the fans missed out.

After the panel, there was only about 30 minutes until close. I managed to get ahold of Frankenhooker  star James Lorenz and get a quick interview, which will be added on to the next episode of the Dark Discussions Podcast. Mr. Lorenz was a great sport, and like his character sports a sharp with. Both he and Patty Mullen were great to the fans and even though I hadn't seen the film until the day before the convention, I now consider myself a fan of both. Please be sure to stop by their booth at future shows. 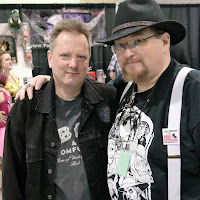 And when that was over, so was the con. Long drive home, and time to go back to work. All in all Scare-A-Con New England was a great time for all. Despite thin turnout (common to first year cons), the celebs seemed happy, the vendors turned a profit, and the fans enjoyed themselves. I want to thank JV Johnson for inviting the Dark Discussions crew, and hope we can do it again next year.

In a little over a month there will be another convention first, Phil, Eric, Patrick and myself will be vendors at Scares That Care Weekend 3 in Williamsburg, VA. Should be a blast, and we'll be raffling some things off to support the cause. If you're in the neigborhood, please stop by and say hello.

A couple of vendors I want to recommend. First, the lovely Firona and her monstrous offspring of Fiona's Fright Shoppe. She has handmade horror soaps and various horror kitsch, including Frankenstein bags we'll be giving away at STC3. 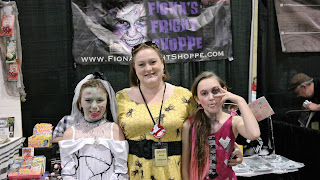 By the end of the weekend, I'd say at least 10% of the crowd were sporting Monsters Are Good gear. Horror tee vendors are a growing breed, but Monsters Are Good have a unique style that harkens back to the classics. I'll be sporting their glow in the dark Big Frankie tee for the STC3 Frankenstein panel. 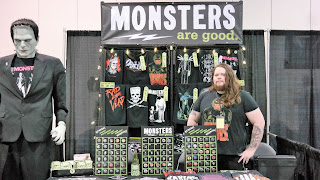 Fangirl Beth Jankowski and her crafty sidekick were in attendance. Like horror tees, jewelry kiosks are plentiful on the con circuit, but Beth made great effort to get out and circulate and sell her stuff. Mostly made for the distaff side of the gender fence, but I like her style. And a special shout out to her husband Mike for his service and sacrifice. 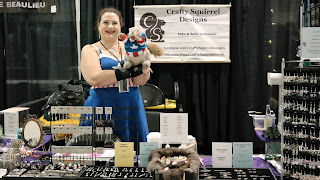 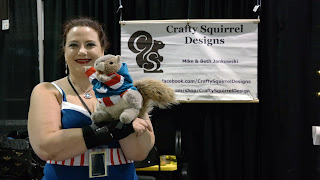 Lastly we have Happy Kitty Studio's founder Lisa showing off her wares. I have a soft spot for those who combine the creepy and the cuddly, and when I saw her Harley Quinn kitty, I just had to grab one for a graduating student who is a nut for Mister J's better half. 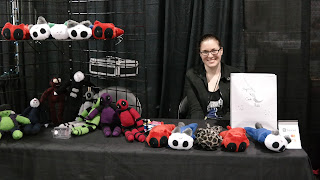 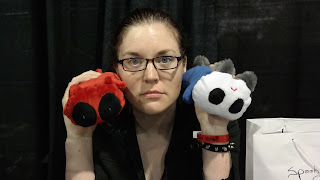 Massachusettes Ghostbusters were out saving the day one last time, and managed to raise more than $1000 for a local children's hospital. The gentleman picking the raffle winners is none other than Butch Patrick, better remembered as Eddie Munster. 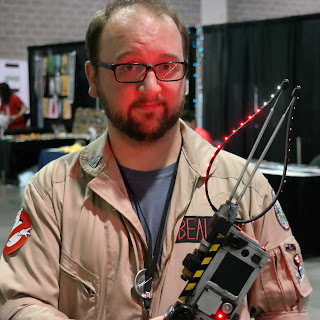 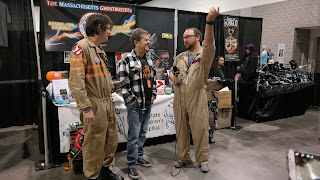 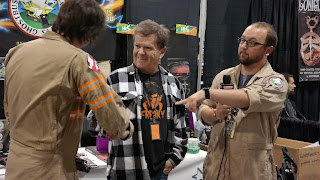 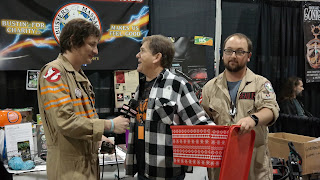 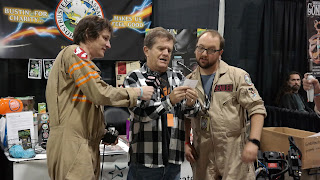 And let's just finish off with a father and son zombie hunting team. Parenting done right. 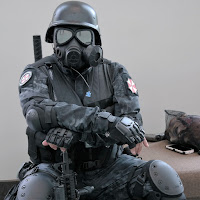