I always forget how tiring a con can be. You don't really notice at first - you're spending most of the day in one room, albiet a very big room, which you make a few dozen trips through, or standing in line or sitting down at a table, screening or panel. But at least for me, I'm always on, talking to people, either trying to glean some nugget about their business, or selling the podcast, or just reveling in being a fan. And I'm just going on adrenaline, and when it goes at the end of the night, I'm just left drained, albiet in a good way.

Phil and I started the morning with, well, we actually started with a damned fire alarm at 6 am, a tradition started at Scares That Care 2 which I am not happy to see continued. So that kind of killed what little rest we had, adding to the above exhaustion.

Anyway, after breakfast at the hotel and setting up the table (lesson learned: stock up on tape for the banner) we finally recorded the Frankenhooker episode. Got about 45 minutes in when the doors opened and fans started coming in. A few joined in for a bit, and we went to the lovely Patty Mullen to settle a question about the film's finale. Should be a fun ep, and may have an interview with James Lorinz to add if the timing works out tomorrow. Both Patty and James were gracious in their dealings with me, and I urge you to seek them out at future conventions. If you're not a fan already, I promise they will win you over.

Later the fine folks at the Dorkening invited us to an interview, currently available on facebook, and soon to be the most widely downloaded video in YouTube history.


On the celebrity front, I was able to take a new pic with Tom Atkins as yesterday's come out fuzzy, and then tracked down Tony Moran from Halloween  and Trace Beaulieu and Frank Coniff of MST3K.

Real treat though was speaking with fellow fans. This is really why I do the podcast and why I love coming to cons. Met a lot of people of all ages and walks of life and handed out almost all of Kristy Peterson Schoonover's "Greatest Hits" discs. Only a half dozen of the original batch left.

Speaking of, we met our first listener yesterday, a gentleman by the name of Anthony Thurber, who found us specifically because of Scare-A-Con, so thanks to both Anthony and the convention!

Lastly, there were awesome costumes all around. Some to promote FrightFest or the Haunted Hay Maze, others just people having fun. The time and effort -not to mention talent- people put into their hobby never fails to amaze. 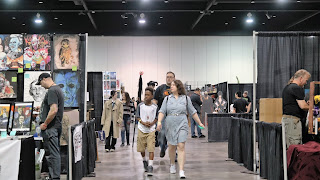 Definitely a busier day than yesterday. Cons are notoriously difficult to turn out in their first year, but most of the vendors I spoke to were in the black or close to it. Hopefully that means another con next spring. 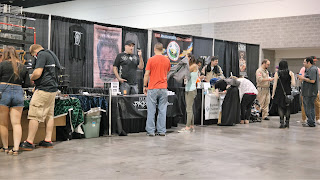 Some more of the MA Ghostbusters crew - I swear they multiply like tribbles. Yesterday there were 4, must have been over a dozen today. They'll let anyone have an unlicensed nuclear accelerator today.... 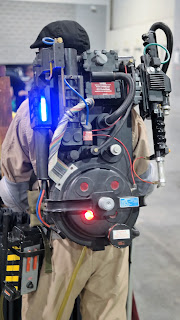 That Ecto Cooler is in high demand according to Facebook and eBay scalpers, but these guys are just giving it away! However, they have raised over $500 for charity this weekend, so they can hoard whatever they want. 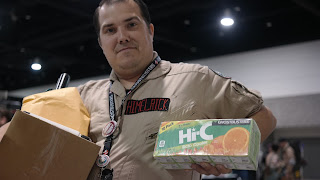 Here's some folks who stopped by during the Frankenhooker podcast: Night life Freddy Kreuger, Anthony Thurber, and... um... I don't remember their names. Sorry. Bad blogger. 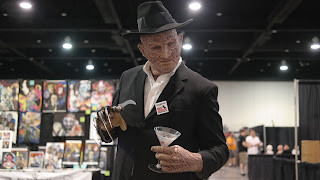 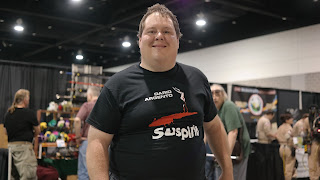 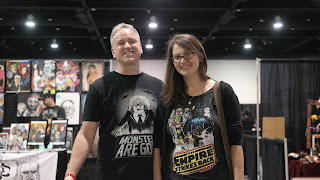 And here's Frankenhooker herself, Patricia Mullen: 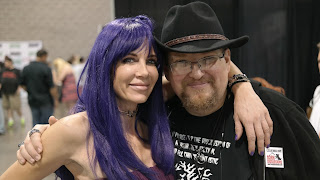 By now you've heard the next Friday the 13th film will be a prequel, in which we meet a young Jason and his father. They put in a surprise appearance at Scare-A-Con to promote the film. 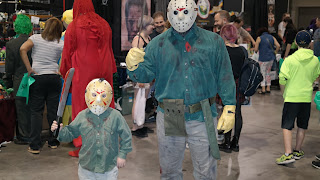 The very fine folks at the Dorkening, our neighbors throughout the weekend. I have total tech envy. 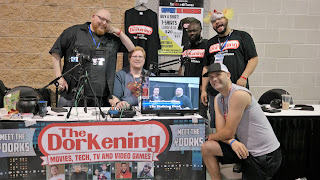 The Dorkening only employs top professionals - no monkeying around. 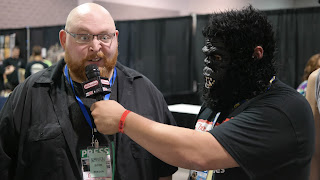 The good lookin' man in front was the winner of today's Ghostbusters raffle (and some of those Ecto Coolers). Some guys have all the luck. 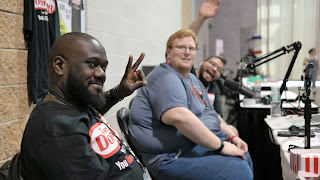 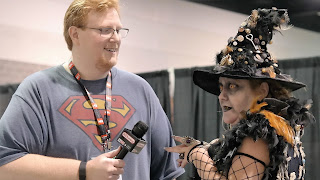 I know, I know - who's the lady with the sexy eyes, and is she single? That's Heather the Hag from (I believe) the Haunted Hay Ride attraction. Her piercing cackle could be heard throughout the hall. 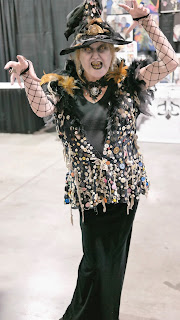 This guy (I really am terrible at names) circled the hall all weekend like a Bohr model electron. I hope he got my good side. 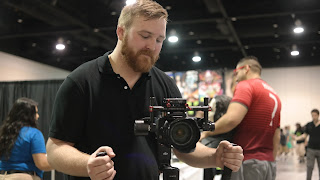 Hot patootie bless my soul! The Kids of Albany were here promoting a screening of an old cult film. Solarbabies I think. 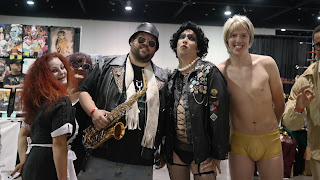 Tom Atkins again, graciously agreeing to a new pic. He even gave the photographer a kiss. 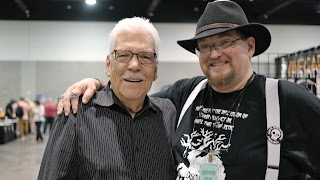 The original Michael Myers. Have his signature on a few items already, I wanted something personalized. 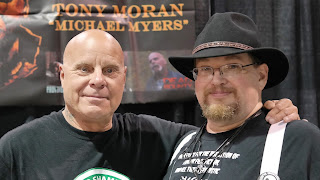 Co-host Phil Peron with one of the hosts of Trick or Treat Radio. Note that Phil never read the memo about the dress code. 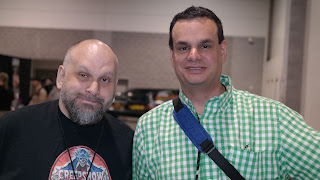 Here's the rest of the degenerates of TrT Radio. 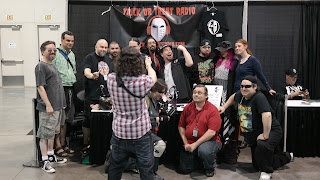 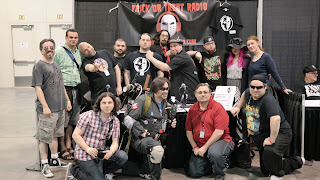 Check out that button! Thank you for supporting our humble show....whoever you are.... I need a Secretary of Names or something. 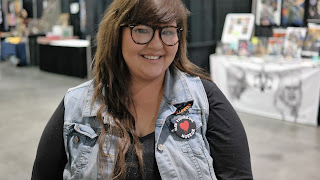 File under "shit you only see at horror conventions." Gotta give Chucky credit. He's been running around the hall all weekend to promote FrightFest. Or the maze. Or hayride. One of them. 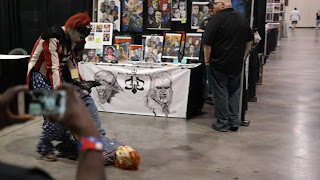 Finally some more costumes. I applaud your talent and your enrichment of the con experience, and I wish the ladies luck in dealing with the Disney attorneys. 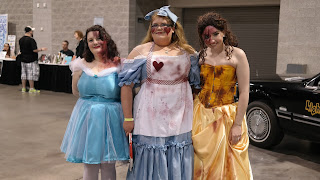 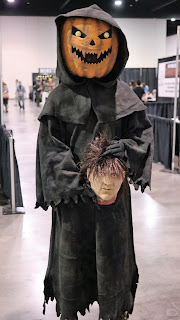 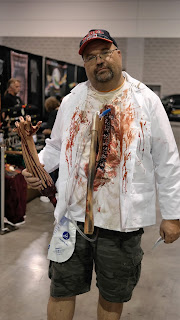 All joking aside, if you or someone you love is pictured above, please contact me with the correct information and I'll update the post.
Posted by Mister D at 11:06 PM