Day 4 of the May Monster Madness Blog Hop. I hope you all are enjoying this as much as I am. Sorry this is so late- it was a bear of a day highlighted by a faceplant into the sidewalk. Hint: don't trip with your hands in your pockets. Thankfully my face broke my fall. Still don't know how I tripped, but I wouldn't be surprised to see one of the monsters below is responsible:

Disembodied Hands
There are several of these running around that I am aware of, most notably Michael Caine's from the Oliver Stone magnum opus The Hand, Bruce Campbell's from Evil Dead II (Bruce will return later in the list), and of course Thing Addams from The Addams Family. I'm not really sure body parts count as monsters, but my list was a tad thin otherwise. Really the biggest danger they pose is their ability to pull horrible puns from onlookers.

Killer Toys
A ton of these guys running around, too. From Demonic Toys to Small Soldiers, we have Good Guy Dolls and Voodoo dolls, Talking Tina and the Zuni Fetish Doll, Dolly Dearest and ventriloquist dummies. Does the clown doll from Poltergeist count, because that thing was pretty damned freaky? 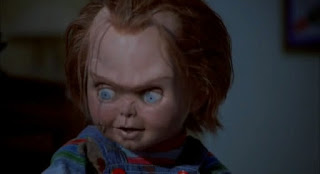 Mind Controlling Alien Parasites
Could probably do a MMM post just on these little bastards alone. Off the top of my head there's Night of the Creeps, Slugs, Slither, Shivers (ok, not sure that one was alien), The Hidden, the "Conspiracy" creatures from Star Trek: The Next Generation. Worst for me has to be the Ceti Eel from Star Trek: The Wrath of Kahn.


The Tingler from The Tingler (1959)
Speaking of parasites, how about William Castle's most infamous creation? I wish some theater still existed with the wired seats. Maybe for Avatar 2 ? 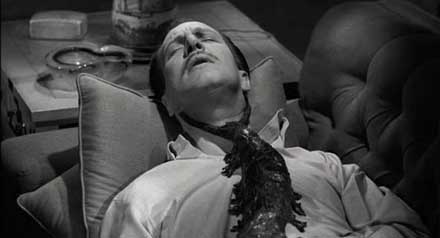 Killer Robot from "The Invaders" episode of the Twilight Zone (1961)
Want proof that The Twilight Zone was one of the greatest things ever on television? Here it is. One of the many fantastic Richard Mattheson penned episodes, this is twenty odd minutes of Endora being terrorized by a wind up toy robot, barely a line of dialogue, just terrific direction, lighting and Jerry Goldsmith's music. 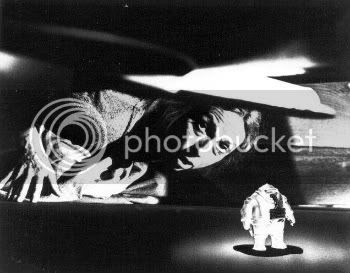 Mini-Demons from the Gate (1987)
Confession - I have not seen this film since it first opened in theaters. I do remember 16 year old me loved the hell out of it. I wanted him to write this entry for me, but no one's seen him for some time. 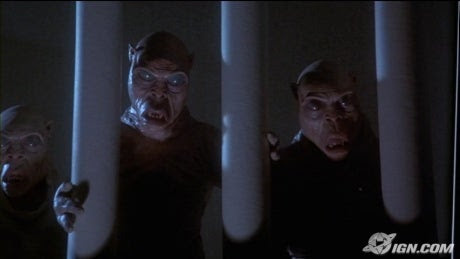 The Troll from Cat's Eye (1985)
Not one of the better Stephen King films, but it was fun. Back then I saw the Troll as a villain, but after teaching for 17 years I recognize he was doing his part to control the vermin population.

Li'l Ashes from Army of Darkness (199)
"Ramming speed!" I know some folks love the new entry into the series, but I really wish there was more maniacal mindfucking (hear our Dark Discussion roundtable on the 2013 film here: http://darkdiscussions.com/Pages/podcast_097.html ). Weirdly I'm having trouble finding images of the evil mini-Ashes, so I'll just put this up instead: 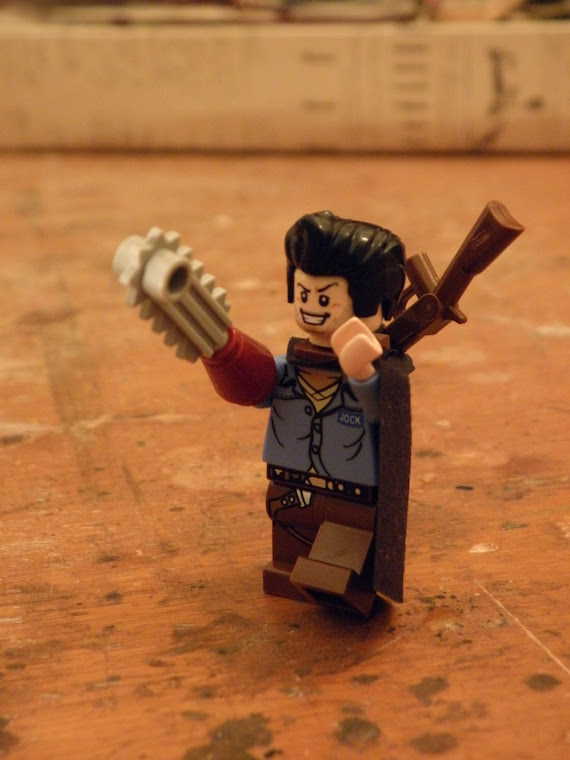 A lot of awesome stuff in the first Matrix film, but this was the one thing that sent shivers up my spine...

Tooth Fairies from Hellboy II: The Golden Army
This is a great movie for monster fans. Gone is the "audience stand in" normal guy from the first movie - all the freaks step up front and center. There are some terrific designs here, and some very solid action sequences (as well as a touching rendition of "Mandy"). The tooth fairies are classic DelToro creatures, and even though they are significantly outweighed by every other beastie in the flick, they are hands down the scariest of the lot. 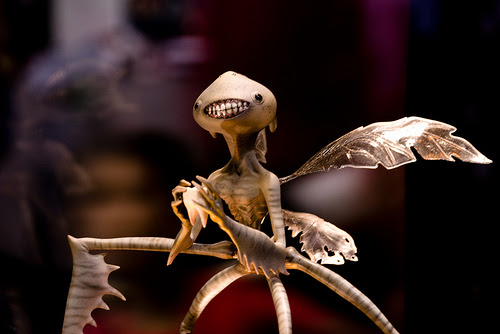 Homonculus from Don't Be Afraid of the Dark (1973, 2010)
Here's another film that terrified me in my youth. The original is very dated, both in (tv-budget limited) effects and in gender politics, but it is still creepy as hell. Del Toro's remake worked for me, too, though the new creatures share more than a little DNA with his tooth fairies. 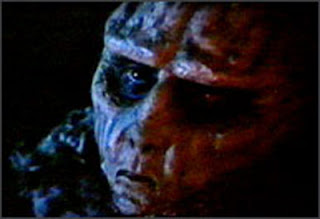 Alien Cobra from Prometheus (2012)
There's a lot  from Prometheus that bothered the crap out of me, but if you can ignore its A-movie ambitions and watch it as a B-grade monster flick, it has a lot to offer. As someone who used to handle snakes for a living, I totally got Milburn's desire to reach out and touch some... thing.

Norris Thing from John Carpenter's The Thing (1982)
Great movie, many great moments. Not many laughs. This was the biggest.

The Facehugger from the Alien franchise
Yeah, we all think of the Alien as scary, but really, when you get down to it, what makes it scary? It's not that its going to kill you. Its that it will grab you, seal you in a wall, and leave you to be mouth raped by this nasty bugger.

Oh, and if you thought Lego Ash was cute... 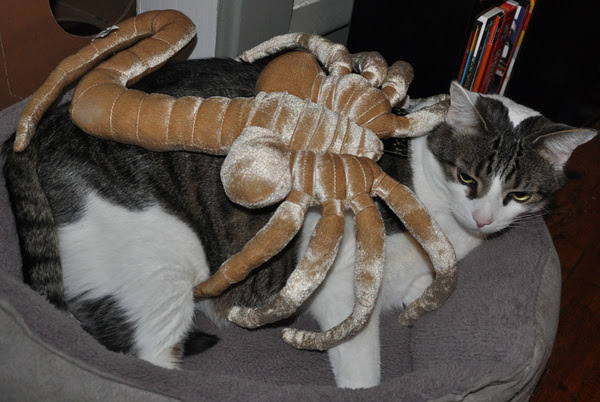 Piranhas from Piranha franchise
I normally wouldn't count "real" animals as monsters, but these have never been normal piranha. Dante gave us genetically engineered piranhas (with a special Harryhausen-esque mini-fish-man to boot!), Cameron gave us flying piranhas, and Roth and Aja gave us prehistoric piranhas, so I rule "monsters all around." The best has to be the Jerry-O'Connell-penis-eating-piranha. 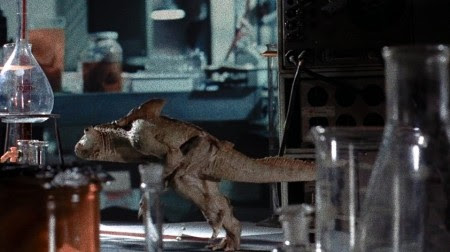 Gremlins from Gremlins franchise
I won't call the Mogwai monsters - too damn cute. But really, these are the Godzilla's of the mini-beasts. Look at all the mini-critters up there from the 80s. Bet all of them were inspired in some form by the Gremlins (and I didn't even toss in the obvious knock offs like the Critters, Ghoulies, Trolls and Leprechauns).  I'm already hearing a lot of bitching about the proposed remake, but I'm excited. Sounds like the studio just has a money making idea and no direction. I suggest we stop bellyaching and take charge. Demand a follow up or reboot, rather than a remake, using state of the art puppetry. Beg the studios for it, let them know we'll support it, and maybe we'll get it. Hell, maybe they'd let Joe D do it again.

Thanks for visiting. Be sure to hop to the pages below. Tomorrow, some monsters will boldly go where no monster has gone before....