This post is my final entry in this year's May Monster Madness Blog Hop. I confess I didn't realize this was supposed to be a daily thing, but being forced to post every 24 hours, regardless of mother's day, late outings, filling out progress reports or smashing my face into the pavement, has proven a mental exercise that I needed. I want to thank Anne for the invitation, Anne, Emma and Ked for setting this whole thing up, and finally to all the participants - both my fellow bloggers and our readers. This has been a fun week, and I look forward to doing it again next year. If you want to hear more of what I have to say, please tune in each week to the Dark Discussions podcast . It took us some time, but Phil, Eric and I have really hit our stride as we hit our 100th episode.


I have no doubt that the heyday of monster films has passed. The only reliable source of monster movies lately has been the SyFy channel, and the less said about those films the better. But all is not lost. There have been some excellent, or at least enjoyable, monster films in recent years, and I've picked a bunch that worked well for me.

Some parameters - I needed a timeframe for modern, so I chose the 15 year period from 1998-2012. 20 years gets us back a full generation, which feels too far back. 15 years gets us to a time where the CGI monster had mostly replaced the practical, and the internet, cell phones and other modern conveniences were becoming everyday things that most films could no longer ignore.

Also to keep it modern, I ignored films that were continuing from an earlier era. No remakes or sequels to old franchises, so those new Godzilla films were off the table, as was the Kong remake, Don't Be Afraid of the Dark and Piranha 3D.

I am also sticking with what a "monster movie" means to me. Something tangible - no ghosts. Something unnatural - no normal sharks, gators, snakes, etc, though mutated or genetically manipulated forms were fair game. Nothing human or close to human - slashers, serial killers, real historical figures, etc. Lastly, nothing so overly familiar that they have graduated from the "monster movie" genre into one of their own - vampire movies, zombie movies, werewolf movies, etc.

So without further ago, 25 26 of my favorite modern monster films, in semi-chronological order:

Stephen Sommers' first film remains his best. Treat Williams and Famke Janssen play a pair of theives on a luxury cruise ship beseiged by a prehistoric sea monster called Ottoia (which in fact bears next to no resemblance to the actual animal it is supposed to be).  Fast paced and tongue firmly in cheek, this film would make a great double feature with Tremors.

On the heels of Scream, Robert Rodriguez delivers a post-modern teen horror blend of Invasion of the Body Snatchers and The Thing. The monster itself is only revealed in small bits towards the end, but this before-they-were-stars studded yarn is one of the strongest horror flicks of the 90s. (Soon to be discussed on the Dark Discussions podcast - stay tuned!)

Let's be honest, the monster genre has more cheese than a fondue party, and Deep Blue Sea is perfectly comfortable being a can of Cheez Wiz. What's not to love about genius level bio-engineered sharks chasing Thomas Jane, LL Cool Jay and Sam Jackson through the confined corridors of a sinking medical research platform? 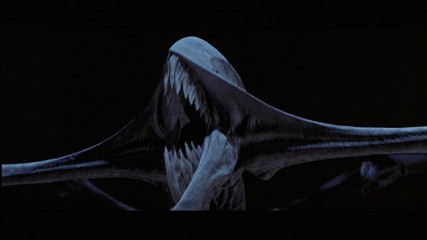 Vin Diesel arrives in style in David Twohy's visually stunning, morally ambiguous thriller. Riddick is one of the best characters of the last 20 years, and Pitch Black offers layers for those willing to look deeper than its Aliens-inspired action. Check out the Dark Discussions episode here. 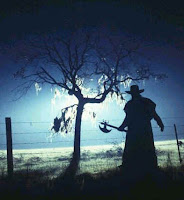 A tight thriller that divides people with its ending. The finale made the movie for me, when it revealed that the Creeper was in fact some unearthly being, and not merely some nut job. Monster movies were pretty thin back then, so it was a pleasant surprise (now spoiled. Sorry!)

Who says monsters have to be scary? Well, I guess I did, but if this movie does anything, its show that scary is in the eye of the beholder. While far from my favorite Pixar film, Mike, Sully and Boo are some of my favorite characters from their stable, and this film is a visual treat for any monster fan. 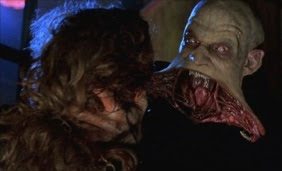 Here not for its vampires, but for the Reapers. The film that cemented my love for Guillermo del Toro. A great blend of action and horror. 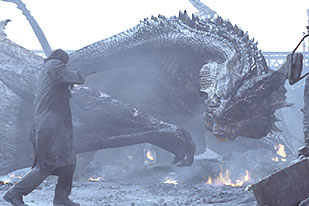 It's kind of shocking that dragons, one of the greatest monsters of legend, didn't really get much love until the last decade, and even now Dragonslayer's Vermithrax Perjorative remains the standard. The apocalyptic setting is a great twist to the classic trope.

I rarely use the term "instant classic", but this one was. An absolute must see (just make sure you don't get the American ending). And don't forget to hear the Dark Discussions review!

Best known for being the most successful Project Greenlight film, this really is a nice little gem of a monster movie. Fast paced, sharp humor, and not at all shy about pulling the trigger on any of the characters. An excellent variation on the "monster seige" movie.

No, not the Chris Farley vehicle. This tale from down under features carnivorous GM sheep, an evil sheep fetus, and tosses in a weresheep for good measure. One of the best horror comedies of the last decade.

This Korean monster movie has of the best monster moments ever, as the monster runs up and down a riverbank eating people on their lunch break. Its a big wad to blow so early in the movie, but the daring choice pays off and the film delivers. 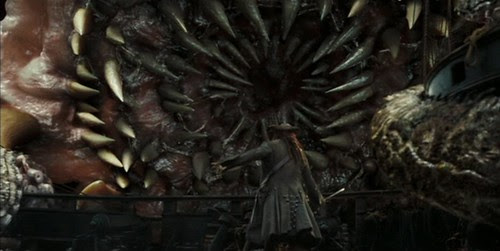 The first film was all swashbuckling, this time its all sea monsters. It has my favorite celluloid adaptation of the Kraken, and the Flying Dutchman is jam packed with awesome creature designs. 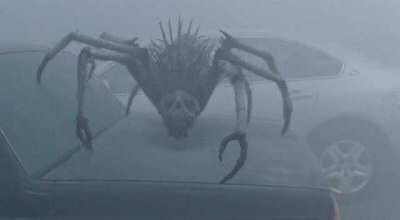 Thomas Jane returns to the list in what may be my favorite Stephen King film ever. If you have a chance, watch the black and white version - it just enhances the mood and disguises some of the weaker FX shots. We covered this film in one of my very first Dark Discussions podcasts (forgive the rough edges).

Not a lot of western monster films out there (Valley of the Gwangi and....?). In this tale a group of lawmen take off after some Indians for killing a band of settlers, only to watch it all go to hell once they discover the true killers. 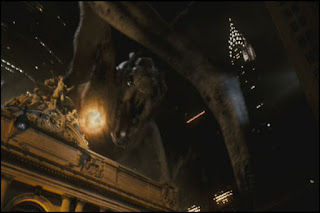 A great "man in the street" take on the classic monster rampage. Not a huge fan of Clover himself, but his little parasitic buddies creeped me out. Just waiting for the sequel... 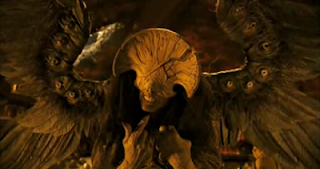 I already mentioned the Tooth Fairies, but this is a film chock full of great monsters. The Plant Elemental is simply stunning. 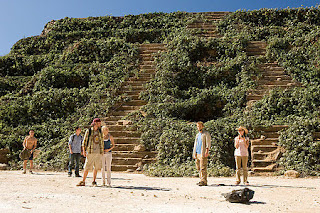 A pair of criminals and their hostages are trapped in a gas station by a fungal (?) parasite. The use of a gymnast as the monster results in the creepiest set of moves since Linda Blair came down the stairs. Discussed on Dark Discussions podcast. 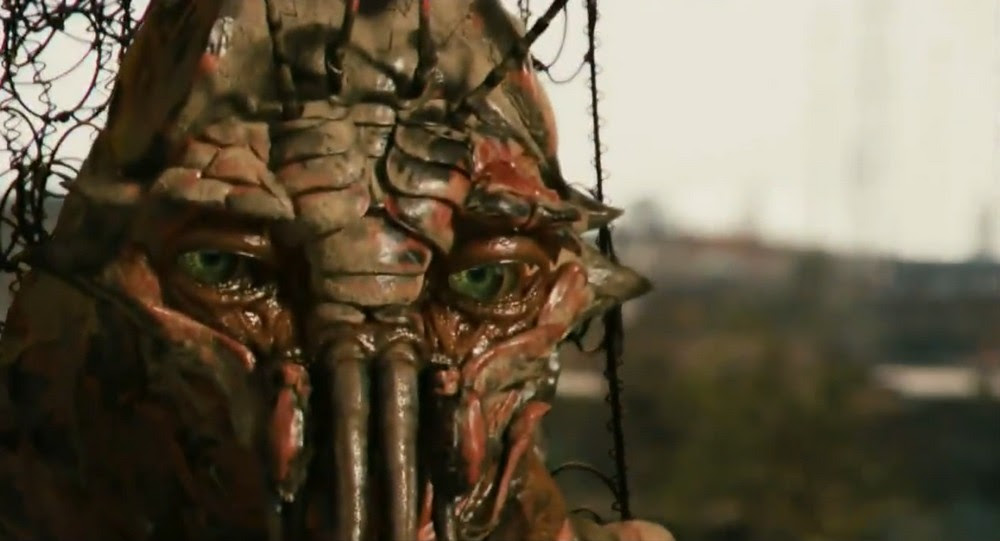 Neil Blomkamp's debut film is one of the stronger SF efforts in recent memory, and the Prawn one of the most well realized CG creatures to date. 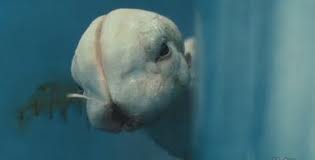 A slow burn Canadian SF-horror hybrid. I think it has been terribly misunderstood by its critics. A modern Frankenstein film that again asks what responsibility we have to our creations, and what price must others pay for our own hubris. 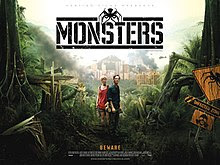 The giant alien monsters take a back seat to the human drama. The use of post-monster carnage  to comment on US foreign policy may irritate some viewers, but the film works for me even when its politics don't. 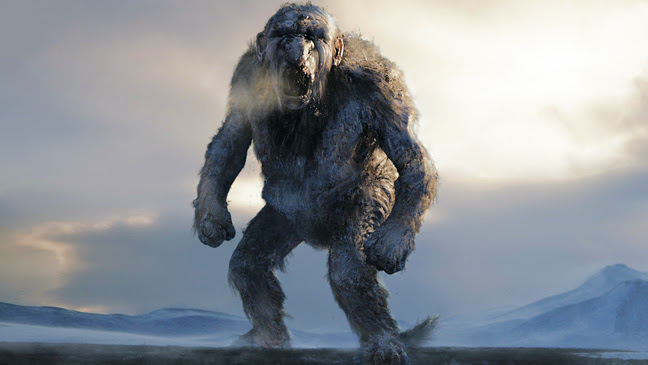 A Norwegian found footage film taps into classic folklore to deliver a fascinating behind the scenes look at how the government handles monster containment. Another must see film.

One of my favorite films of 2012, by one of my favorite entertainment-makers. The finale is just bug nuts with monsters, and the ride there is a treat too. Check out the Dark Discussions Podcast.

So there you go, 25 26 films that prove the monster genre just ain't dead yet, and with movies like Pacific Rim coming down the pipe, we might yet be seeing a revival.

Are there any films I missed? Anything you think deserves a mention? Please let me know in the comments.

Thanks again to everyone involved in the 2013 May Monster Madness Blog Hop. I just checked my stats, and today is by far the biggest day I've ever had. Come again soon!