(Spoilers below for The Walking Dead, Breaking Bad, the Sopranos, and Sons of Anarchy, but I tried to keep the details to a minimum).

Anyone else noticing there's some undeserving hate going on for the female leads on some very good shows? The two I'm thinking of in particular are Lori Grimes (The Walking Dead) and Skyler White (Breaking Bad).

Look I get the "bitch problem." Writers have long known, and feminists have long complained, that strong women often get slapped with the b-label. Of course, many times they were supposed to be bitches - I empathize, and I don't think its new, but what's unusual in this case is that I don't think the show runners intend for them to be bitches, like, say, Joan Collins on Dynasty,  Jessica Lange on American Horror Story, or all the women of Desperate Housewives. Heck, those characters became popular because of their bitchiness. But poor Lori and Skyler, their "fans" hate them. 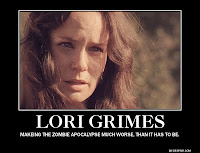 Let's start with Lori Grimes. The Walking Dead has been a huge hit for AMC, featuring some great zombie gore, morally complex situations, and some very solid characters, yet its most popular and persistant meme is "we hate Lori" (Google count: 17,600) Why?

Honestly, I can see some of the complaints. The writers have had issues with handling some characters, and sometimes they have the characters do stupid things to move the story forward. In this case, its the fact that Lori just can't keep Carl out of trouble. But is that the cause of the hate? Probably not.

The one thing many people come back to is her affair with Shane. The writers definately hurt her case here - they never told us how much time had passed, making it seem like Lori couldn't wait for the zombocalypse to bone her husband's deputy. They also changed the relationship - in the comic, it was a one time roll in the grass. On the show, they're acting like newlyweds. But when Rick shows up alive she drops Shane faster than Dale can pass judgement, and turns icy cold towards him. In her defense, she thinks Shane lied to her, and Shane is a bit of a nutjob. It doesn't help that in debates she often vacillates between Rick and Shane's side of an argument. I think that can be explained by her own conflicted emotions over what she did, but I can see how it would frustrate the audience.

Then there's Skyler White. I was honestly surprised to find how many fans hate Skyler (Google count: 23,700). Woman's in a tough bind - just gave birth in her 40s, son has cerebral palsy, husband gets cancer, and after months of lying, she discovers he's slinging meth. By the fifth season she is clearly falling apart. I feel nothing but sympathy for her, but again, she's "a bitch". I get her son feeling this way (he even says it to her), but he doesn't know what a giant bastard Daddy has become. But the audience should know better.

The easy answer here is that she too had an affair. Critics point out she had the affair knowing her husband was dying of cancer. But this was in the third season of the show. The cancer was in remission and she had discovered the truth about Walt. She was angry for his lies, terrified for the danger he put her children in, and frustrated Walt wouldn't grant a divorce or separation. She sleeps with her boss for one reason - revenge. It is the one and only way she can get back at Walter, and hopefully push him into granting the divorce.  Sure, sleeping with a guy for revenge is pretty much the definition of bitch, but given the circumstances, how can you blame her?

Support for the "affair" argument can be found in one of the Queen Bitches of television: Carmella Soprano. In a show filled with unsympathetic characters she was one of the most hated. And while she never actually had an affair while with Tony (she "dated" during a trial separation), she sure put  the moves on Father Phil and henchman Furio. But then, her husband was a serial philanderer and a crime boss - doesn't that get her any slack?

In contrast, the Gemma Teller-Morrow, the "Old Lady" of Clay Morrow, President of the SAMCRO motorcycle club in Sons of Anarchy. Now here's a character who would probably be proud to get "bitch" tattooed on her bosom. When we first meet her, she threatens the mother of her grandchild. She is a fierce manipulative... well, bitch.  But fans seem to love her (Google search for I hate Gemma: 232). The network even sells shirts asking "What would Gemma do?"

So what's the difference?

The easy answer is that Gemma is also fiercely loyal to her husband, her son, her grandchildren, and to the club. She stands by her men, where Lori, Skyler and Carmella did not. Of course, we later find out that she was probably sleeping with Clay before her first husband died, but we never met him, so the betrayal doesn't matter. Besides we don't learn that until late in the series.

So is that it then? We will like the women so long as they don't stray? It would certainly play into common feminist critiques. I certainly think its a factor, but allow me to propose another.

I said earlier that these shows share a certain moral ambiguity. Three of them are about criminals, and the last, the Walking Dead, is about surviving an apocalypse.  Viewers tune into these shows with certain expectations, and will forgive things that allow them to see what they tuned in for. We certainly want to see Rick and Shane kill some zombies. We route for Walt to go deeper into the criminal underworld. We expect Tony Soprano to be a glamorized mob boss. And therein lies our problem - Lori, Skyler and Carmella all are working at cross purposes with the audience.

Remember how I said Lori only had one impulsive shag with Shane in the comics? Well, in the comics, Shane was also a much bigger ass hole, and he died much earlier. The whole affair thing was a comparatively minor point. And fans still  hated her. Why? I think in large part it was because she kept reminding Rick of his duty to be a good father, to protect his son, to not risk his life needlessly - which is exactly what a good wife and mother probably should do. But of course, that's not what fans want. Fans don't want to watch a Rick Grimes that plays it safe for his family. We want him out there risking his life, shooting zombies, and if he hands Carl a gun and takes him along, so much the better. We don't want Lori tossing a wet blanket on our fun.

Over on Breaking Bad, Skyler is trying her best to save her family from a husband who keeps pissing off drug lords. If this was your sister, I guarantee you'd be telling her to get away from him. But we're watching for Walter. We're rooting for Walter. We've watched Walter do some horrible, horrible things for his family and now she wants to take them away? Even worse, she wants to take him out of the meth business. Why? So we can watch 3 seasons of teaching Junior to drive? No, if Skyler wins, the show is over. Our fun is over.

Carmella? Sorta the same, just deeper. After all, from the start we know she's complicit with Tony's actions, even his affairs. She knew who she was when she married with him. She knew about the women. That was her choice, and ours. But later she wants out - she wants Tony out. But we don't want to see Tony Soprano, suburban father. Even worse she spends a good part of the series condemning what Tony does while embracing the comforts that gives her. She wants all the benefit without taking the blame. No one likes a hypocrite.

And Gemma? Yep, she supports her husband, son and gang. And while she rarely gets directly involved in the "club business" we tune in for, she does some seriously Machiavelli shit to make sure that we'll keep getting what we want. She not only doesn't work against the audience, she's joining in the fun.

I don't want to minimize the infidelity issue or the double standard applied to female characters. I just think the "wet blanket" factor compounds the "mistakes" that turns fans against them. If writers don't want us to hate these characters (and to be fair, there are times when they do), they need to take greater care not to pit them against their audience. I've seen many fans wishing that Skyler would just join in the meth business and stop complaining. Of course, there's just eight episodes left so its a little late for her. But Lori? She still has time. She could have years left on the show. Maybe letting her have a gun and blow away a zombie or two would help audiences warm to her. At the very least, have her helping in Carl's training rather than shield him, support and encourage Rick's leadership, rather than keep him home. The absolute last thing the writers want is for audiences to cheer if and when her time comes.